Bipolar disorder is a medical condition in which people have dramatic mood swings—from overly “high” and/or irritable to sad and hopeless, and then back again, often with periods of normal mood in between. Severe changes in energy and behavior go along with these changes in mood. The periods of highs and lows are called episodes of mania and depression. Bipolar disorder is no one’s fault. It does not come from a “weak” or unstable personality. It is a medical disorder that can be treated. About one to two per cent of adults worldwide suffer from bipolar disorder. Men and women are affected equally. The first signs of bipolar disorder are being recognized in adolescence or early adulthood. Yet the younger the person is when the symptoms first develop, the less typical the symptoms may be. The symptoms may be mistaken for teenage distress or rebellion, so bipolar disorder is often not diagnosed until adulthood. 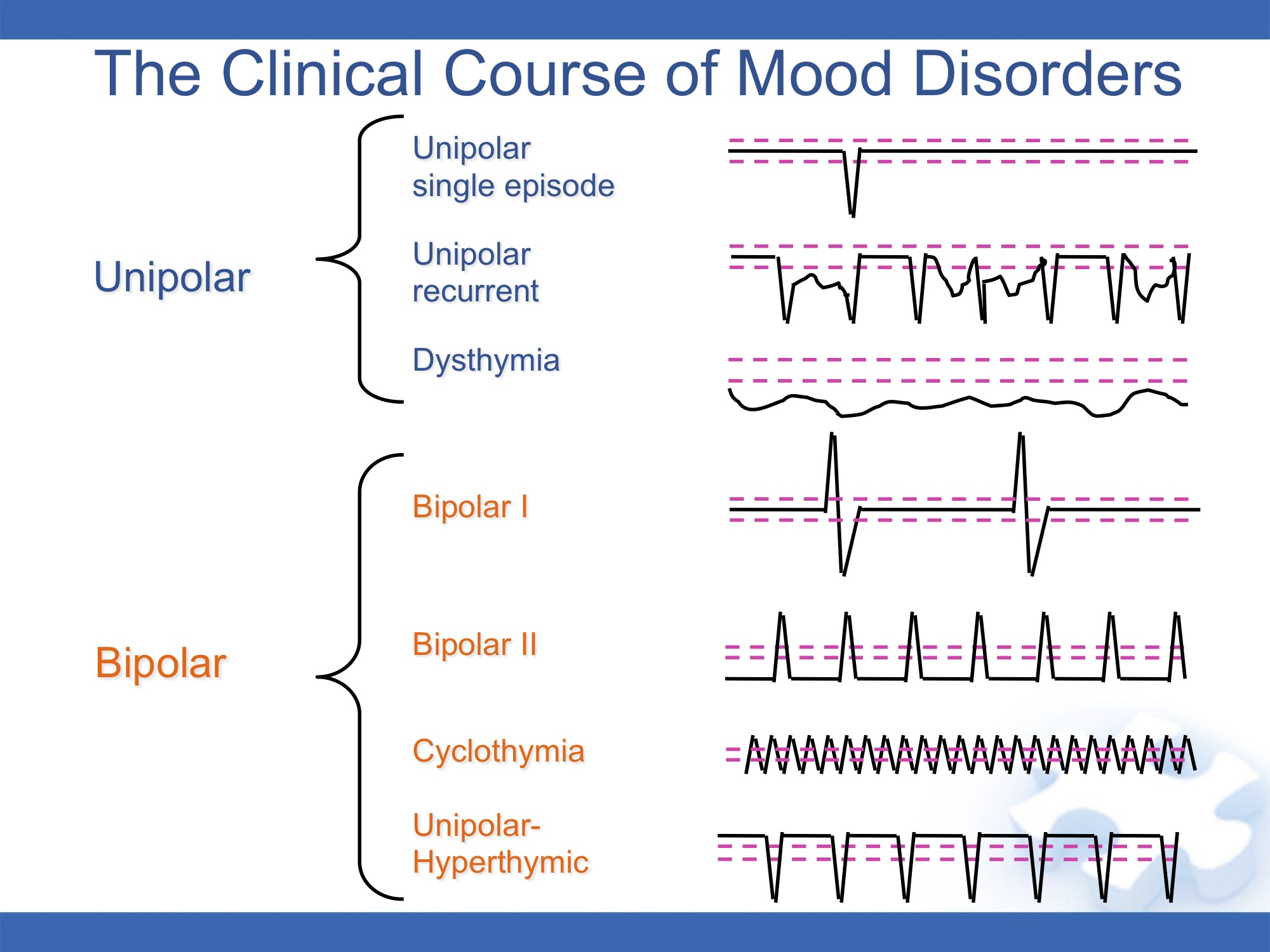 Signs and symptoms of mania (or a manic episode) include:

If some of these symptoms are present most of the day, nearly everyday for at least one week, a diagnosis of Manic Episode may be made.

Signs and symptoms of depression (or a depressive episode) include:

• Lasting sad, anxious, or empty mood
• Feelings of hopelessness or pessimism
• Feelings of guilt, worthlessness, or helplessness
• Loss of interest or pleasure in activities once enjoyed, including sex
• Decreased energy, a feeling of fatigue or of being “slowed down”
• Difficulty concentrating, remembering, making decisions
• Restlessness or irritability
• Sleeping too much, or can’t sleep
• Change in appetite and/or unintended weight loss or gain
• Chronic pain or other persistent bodily symptoms that are not caused by physical illness or injury
• Thoughts of death or suicide, or suicide attempts

A mild to moderate level of mania is called hypomania. Hypomania may feel good to the person who experiences it and may even be associated with good functioning and enhanced productivity. Thus even when family and friends learn to recognize the mood swings as possible bipolar disorder, the person may deny that anything is wrong. Without proper treatment, however, hypomania can become severe mania in some people or can switch into depression.

Sometimes, severe episodes of mania or depression include symptoms of psychosis (or psychotic symptoms). Common psychotic symptoms are hallucinations (hearing, seeing, or otherwise sensing the presence of things not actually there) and delusions (false, strongly held beliefs not influenced by logical reasoning or explained by a person’s usual cultural concepts). Psychotic symptoms in bipolar disorder tend to reflect the extreme mood state at the time. For example, delusions of grandiosity, such as believing one is the President or has special powers or wealth, may occur during mania; delusions of guilt or worthlessness, such as believing that one is ruined and penniless or has committed some terrible crime, may appear during depression. People with bipolar disorder who have these symptoms are sometimes incorrectly diagnosed as having schizophrenia, another severe mental illness.

It may be helpful to think of the various mood states in bipolar disorder as a spectrum or continuous range. At one end is severe depression, above which is moderate depression and then mild low mood, which many people call “the blues” when it is short-lived but is termed “dysthymia” when it is chronic. Then there is normal or balanced mood, above which comes hypomania (mild to moderate mania), and then severe mania.

In some people, however, symptoms of mania and depression may occur together in what is called a mixed bipolar state. Symptoms of a mixed state often include agitation, trouble sleeping, significant change in appetite, psychosis, and suicidal thinking. A person may have a very sad, hopeless mood while at the same time feeling extremely energized.

Bipolar disorder may appear to be a problem other than mental illness—for instance, alcohol or drug abuse, poor school or work performance, or strained interpersonal relationships. Such problems in fact may be signs of an underlying mood disorder.

Descriptions offered by people with bipolar disorder give valuable insights into the various mood states associated with the illness:

Mania: The fast ideas become too fast and there are far too many… overwhelming confusion replaces clarity… you stop keeping up with it—memory goes. Infectious humor ceases to amuse. Your friends become frightened…. everything is now against the grain… you are irritable, angry, frightened, uncontrollable, and trapped.

Hypomania: At first when I’m high, it’s tremendous… ideas are fast… like shooting stars you follow until brighter ones appear…. All shyness disappears, the right words and gestures are suddenly there… uninteresting people, things become intensely interesting. Sensuality is pervasive, the desire to seduce and be seduced is irresistible. Your marrow is infused with unbelievable feelings of ease, power, well-being, omnipotence, euphoria… you can do anything… but, somewhere this changes.

Depression: I doubt completely my ability to do anything well. It seems as though my mind has slowed down and burned out to the point of being virtually useless…. [I am] haunt[ed]… with the total, the desperate hopelessness of it all…. Others say, “It’s only temporary, it will pass, you will get over it,” but of course they haven’t any idea of how I feel, although they are certain they do. If I can’t feel, move, think or care, then what on earth is the point? 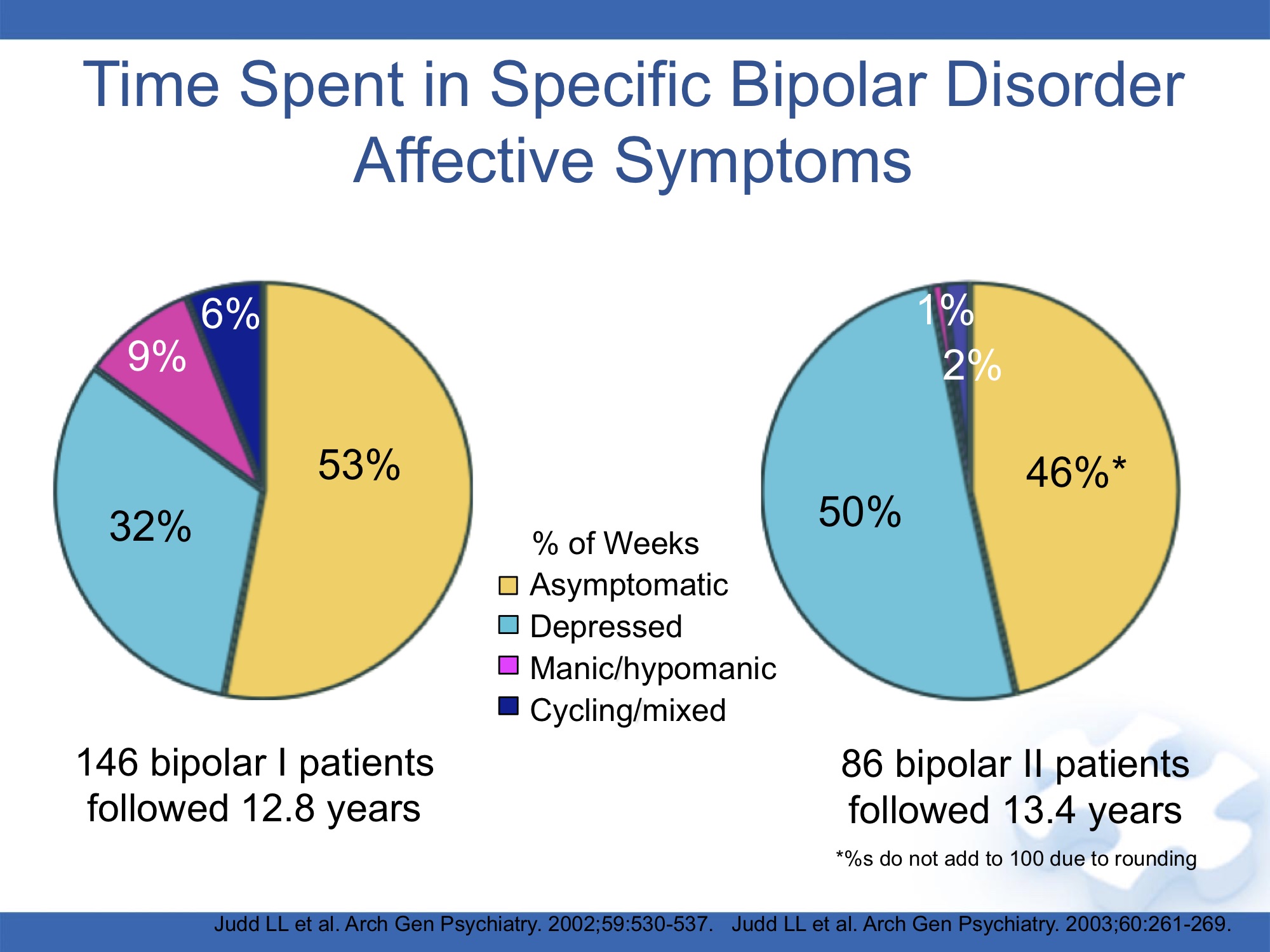 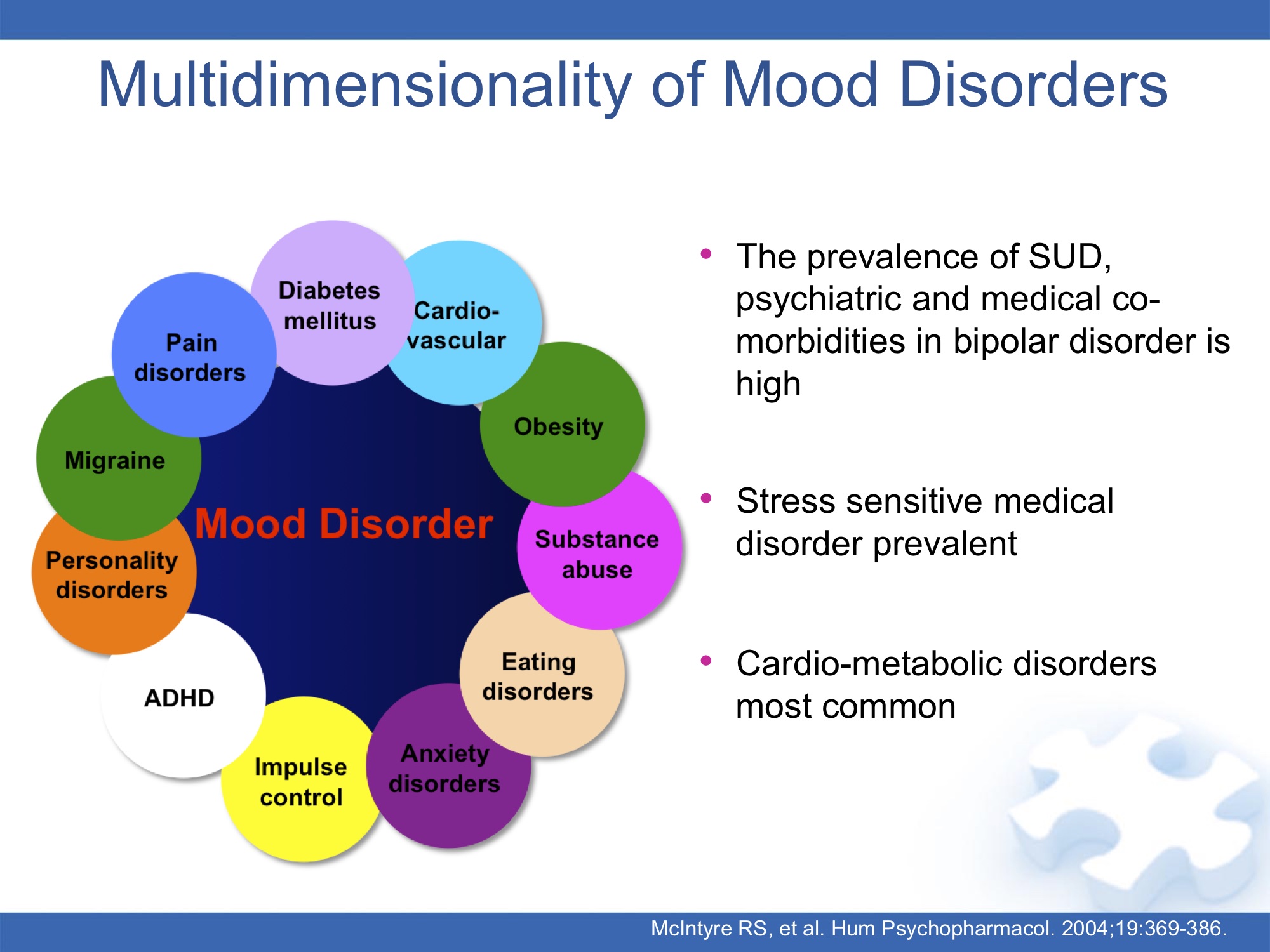 Medications and Other Treatments for Bipolar Disorder:

Medications and other treatments for bipolar disorder are difficult, complex and prescribed by psychiatrists. While primary care physicians who do not specialize in psychiatry also may prescribe these medications, it is recommended that people with bipolar disorder see a psychiatrist for treatment, as this can be somewhat complicated.  Initial medications include newer anti-psychotic medications, especially in severe illness with mania or psychosis and medications known as “mood stabilizers” are prescribed to reduce mood swings.  Some of these medications include Zyprexa (Olanzapine), Seroqel (Quetiapine), Abilify (Aripiprazole), Invega (Paliperidone ), (Lithium, Depakote (valproate), and Tegretol (carbamazepine).

Katherine P. Rankin, Ph.D. and colleagues at the University of California-San Francisco determined that people with bipolar disorders were over-represented in the creative artist population, especially in those who have milder symptoms. Several other studies suggest that people with bipolar disorder believe that their positive moods and manic symptoms can enhance creativity. … In a study of 47 accomplished writers and artists, 89% described intense creative productivity during periods of high mood and energy (Jamison, 1989). A 2012 NIH Review of Creativity and bipolar disorder raises further questions about what is the mechanism that connects these two elements.