Neuroinflammation Definition: an organism attempts to remove an injurious stimulus in the central nervous system (CNS) and initiates a healing process to protect the brain.

It also comprises responses by  microglia see (microglia synopsis), the resident CNS immune cells, increasing inflammatory signals activating immune responses of the CNS. This response can be both protective and toxic, and it can trigger acute and chronic brain changes. Neuroinflammation is a common feature in most severe Psychiatric Illness, Brain damage and Medical Illness. In pregnancy  it is a major risk factor for neuro-developmental disorders.

Neuroinflammation and Psychiatric Conditions: Neuroinflammation is a factor in many psychiatric illnesses, such including depression, anxiety, bipolar disorders and Schizophrenia, but also neuro-degenerative disorders such as Parkinson’s and Alzheimer’s disease and Neuro-developmental diseases such as ADHD and Autistic Disorders. 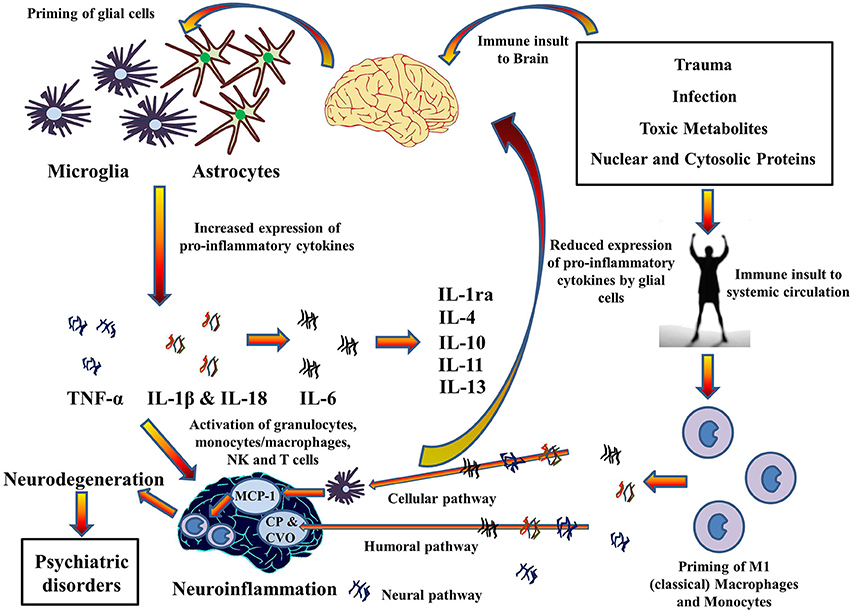 Inflammatory levels of cytokines are found in depression, schizophrenia and Alzheimer’s Disease. High levels of CRP (C-Reactive Protein) in the brain have been linked to neuroinflammation and associated cognitive impairment and dementia, and Alzheimer’s Disease.  Chemokines promote neuroinflammation by attracting leucocytes to the point of inflammation. Neuroinflammation in turn has been implicated for the impairment of brain function. TNF-α and IL-1 cytokines, are pro-inflammatory cytokines that have been primarily implicated in neuroinflammation causing a reduction in hippocampal volumes through the neurodegenerative TNFR1 pathway and can lead to the development of depressive-like behavior. Glial cells, microglia, and astrocytes, are the primary immune effector cells and express various cytokines in the CNS. Though glial cells are neuroprotective, their over expression or sustained stimulation results in increased levels of cytokines, which may cause cellular damage.

Neuro-inflammation and Medical Conditions:  Numerous environmental and biological factors conspire to contribute to chronic inflammation, including life stressors, obesity, food intake, the bacterial composition of the gut microbiota, and the relative balance of T-cell subpopulations.  Chronic inflammation, in turn, is  a common pathway to multiple medical illnesses, including heart disease, diabetes, cancer and fibromyalgia. This understanding may help to lead to newer prevention and treatment strategies for these diseases. 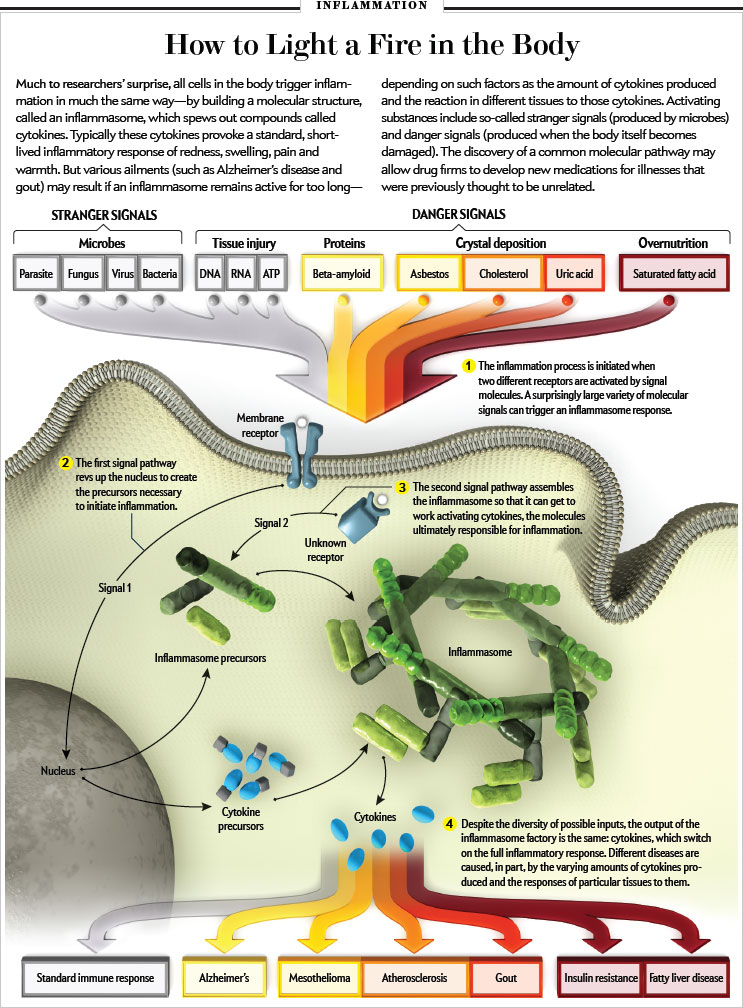 A Holistic Treatment Approch is based on understanding how Microglia activated by major psychiatric and medical Disorders, involving psychosis, anxiety, and pain, increase neuro-inflammation. This results in a cascade that releases inflammatory cytokines and free radicals which cause degenerative brain changes and apoptosis.