Definition and History of Schizophrenia:

Schizophrenia is a serious, complex and life-changing biologic and neuro-developmental disorder. It affects how a person thinks, feels, and behaves.

Schizophrenia  had a very negative public image, but more effective diagnosis, timely and effective acute and maintenance treatments have resulted in patients achieving better outcomes and return to function. Newer drugs in use and under development offer better treatment results. In particular, the introduction of First Episode Psychosis Treatment Programs and Long Acting Antipsychotic medications has reduced relapse rates and improved quality of life in schizophrenia. 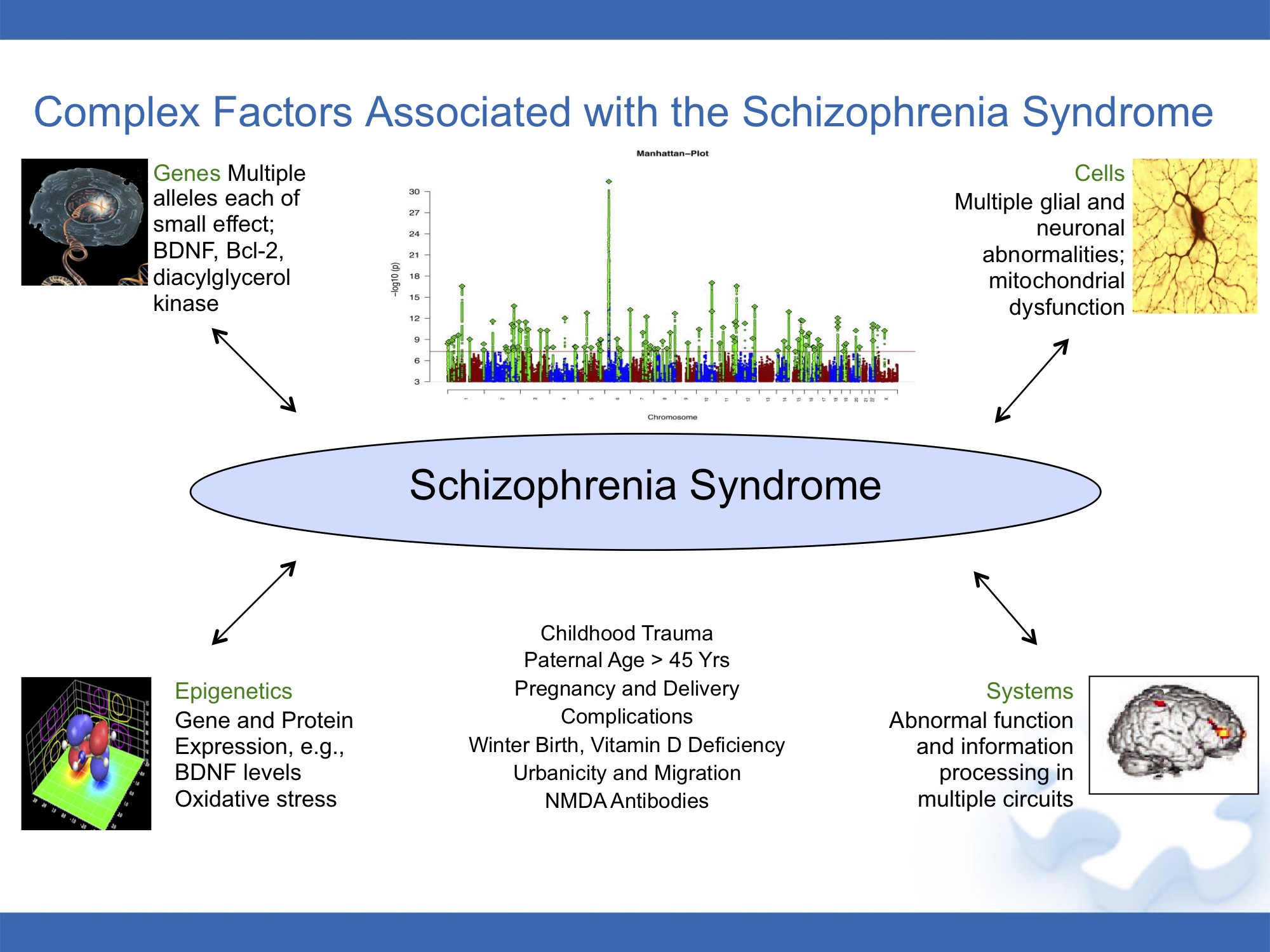 Incidence and Causes of Schizophrenia:

is about 1 per 100 and it is slightly more common in men. Multiple Genetic and Epigenetic factors in schizophrenia include genetic vulnerability at many chromosomes, as well as external stress factor, influence of Marijuana, drug and alcohol abuse.Schizophrenia.

Onset of symptoms is usually age 15-20 for men and age 20-25 in women due to the protective effect of estrogen. The clinical course is gradual onset with subsequent intermittent psychosis and potentially deteriorating course unless effectively treated. 1.Prodromal Phase: Gradual onset of symptoms involve preoccupation,withdrawal, delusions, decline in school or work function and behavioral changes. These may plateau, but usually move on to the acute phase. 2.Acute Phase: Symptoms of acute psychosis, hallucinations, delusions and paranoia, become apparent. Brain stress and neuro-inflammatory processes cause neuronal damage.  3.Chronic Phase: After an acute episode, there are residual symptoms, that may resolve to varying degrees, but tend to increase after each acute episode. After any acute episode of psychosis the risk of relapse remains high and  there is a need for effective acute and maintenance treatments to prevent relapse, prevent emergence of treatment resistance and further brain tissue loss. 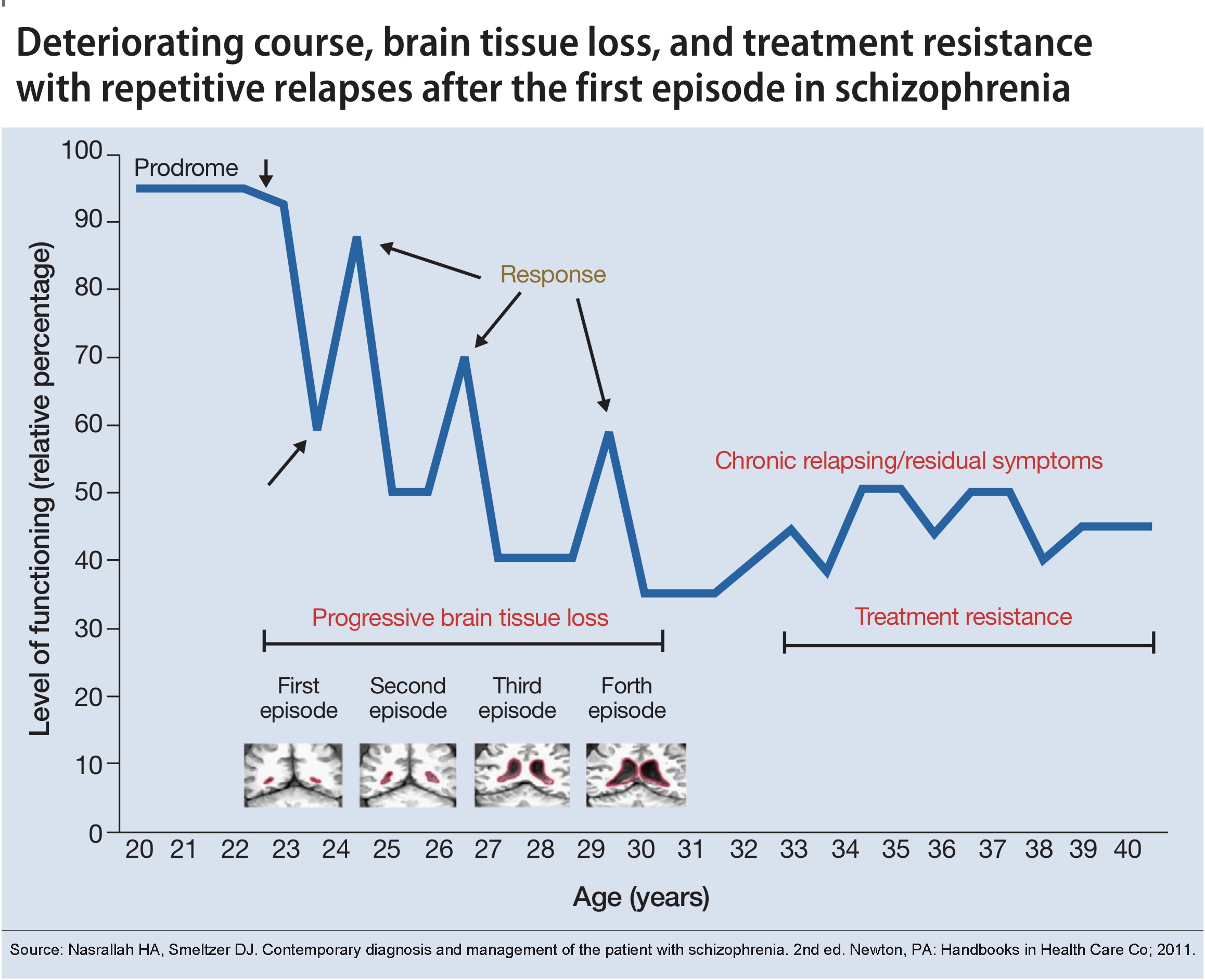 Brain Deficits and Imaging in Schizophrenia:

Deficits are the result of Neuro-inflammation and metabolic and other toxic processes that cause death of neurons – apoptosis. 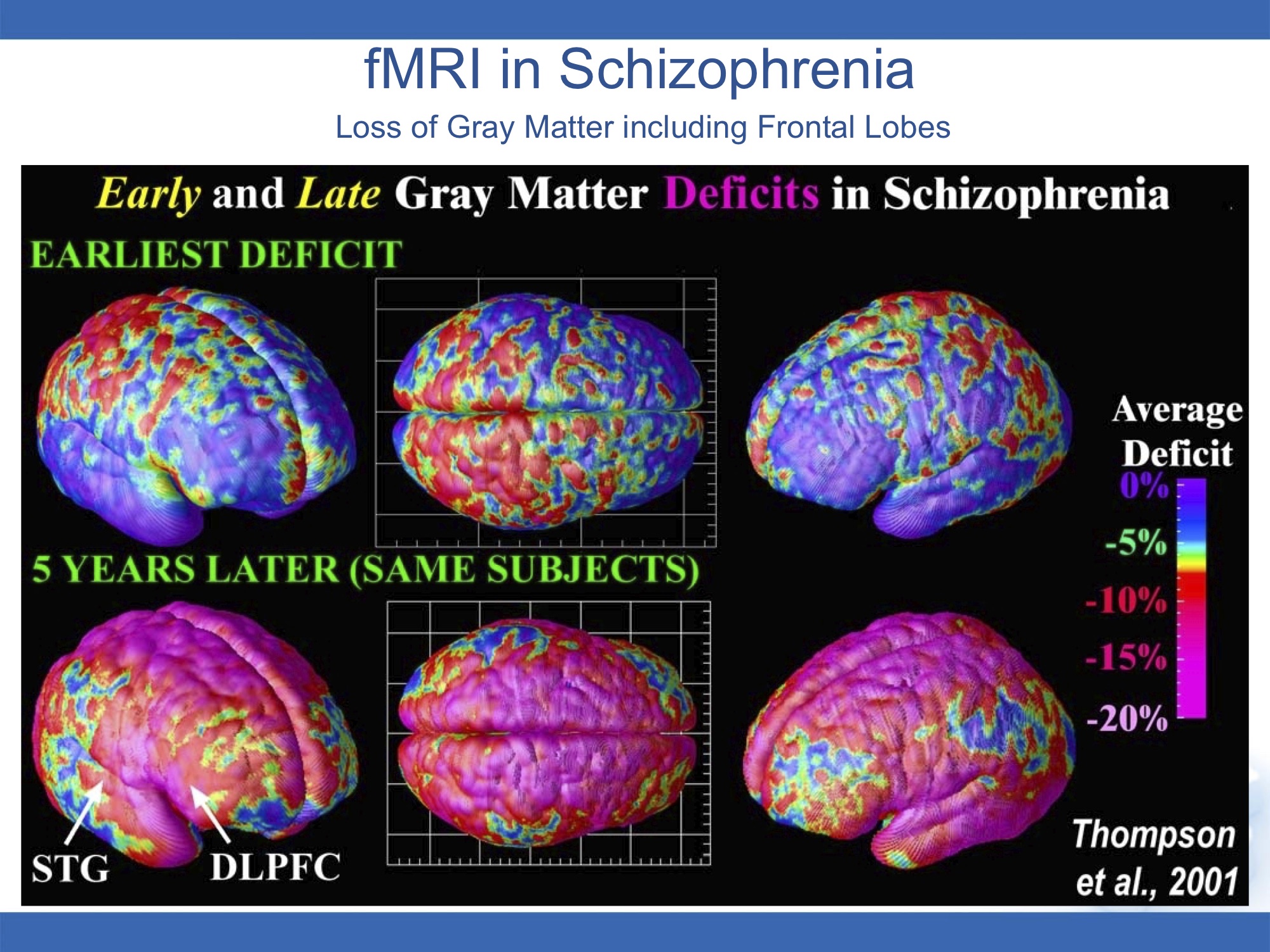 1. Positive symptoms: 1a: Hallucinations: When a person sees, hears, smells, tastes, or feels things that are not real. Hearing voices is common for people with schizophrenia. People who hear voices may hear them for a long time before family or friends notice a problem. 1b: Delusions: When a person believes things that are not true. For example, a person may believe that people on the radio and television are talking directly to him or her. Sometimes people who have delusions may believe that they are in danger or that others are trying to hurt them. 1c: Thought disorders: When a person has ways of thinking that are odd or illogical. People with thought disorders may have trouble organizing their thoughts. Sometimes a person will stop talking in the middle of a thought or make up words that have no meaning. 1d: Movement disorders: When a person exhibits abnormal body movements. A person may repeat certain motions over and over, called stereotypies, or a person may stop moving or talking for a while, called catatonia.

2. Negative symptoms: represent a loss or a decrease in the ability to initiate plans, speak, express emotion, or find pleasure in everyday life. Examples include: 2a: Talking in a dull voice, 2b: Showing no facial expression, such as a smile or frown, 2c: Having trouble experiencing happiness,
2c: Having trouble planning and sticking with an activity, such as grocery shopping 2d: Talking very little to other people, even when it is important. These symptoms are harder to recognize as part of the disorder and can be mistaken for laziness or depression.

3. Cognitive symptoms: or deficits are problems with attention, working memory, and executive functions that allow us to plan and organize and they can make it hard for people to have a job or take care of themselves. The level of cognitive function is one of the best predictors of a person’s ability to improve how they function overall. Often, these symptoms are detected only when specific tests are performed. Cognitive symptoms include: 3a: Difficulty processing information to make decisions 3b: Problems using information immediately after learning it 3c: Trouble paying attention 3d: Lack of insight and understanding based on delusion and paranoia.

5. Risk of Violence and Suicide: Most people with schizophrenia are not violent. If a person has symptoms of schizophrenia, it may result in unstable behaviors, suicide attempt, not necessarily violent.  It is important to help them get treatment as quickly as possible.

Differential Diagnosis and Co-morbidities for Schizophrenia:

The diagnosis is made based on acute symptoms present consistently over 1 month, with some symptoms persisting over 6 months. Differential diagnoses include Bipolar disorder with psychosis, Drug induced psychosis, Borderline personality disorder, Schizotypical personality disorder, Depression with psychosis, Organic brain disorder, Head injury, Infections, Brain Tumors. There is no lab test for schizophrenia, but blood screen and CT or MRI of the head and chest are done to exclude other disorders.

Medication and Other Treatments for Schizophrenia:

Psychosis is caused by excess dopamine activity in parts of the brain, which is blocked by antipsychotic medications. The newer, preferred second-generation (atypical) antipsychotics include clozapine (Clozaril), olanzapine (Zyprexa), quetiapine (Seroquel), risperidone (Risperdal), paliperidone (Invega), ziprasidone (Zeldox), lurasidone (Latuda) and asenapine (Saphris). Aripiprazole (Abilify). The most effective versions of these medications in Canada are IM (Intra-Muscular).

Side Effects: The most common Side Effects include: 1. Muscle stiffness, tremors, tics.  2. Sedation and drowsiness 3. Akathesia and restlesness.  4. Weight gain and diabetes. 5. Hormonal side effects, low sex drive, amenorrhea, and galactorrhea.  6. Tardive Dyskinesia Side effects are troublesome and often serious, and need to be discussed with your doctor. They can usually be managed by adjustment of the medication type, dosage or other.

Involuntary Treatment: Acute psychosis results in brain malfunction, which may cause unstable, unpredictable and irrational behaviors and emergency situations where the person is taken to the a hospital or police are called to assist under the Mental Health Act. Once in the hospital, because of psychosis, the person may not be able to cooperate with required  treatment and require involuntary detention and  treatment until the psychosis subsides. In some cases the person may continue on a Community Treatment Order or CTO, which requires compliance with anti-psychotic treatment, to prevent relapse of psychosis. Persons who have been subject to Involuntary detention and treatment decisions are visited by an independent  rights advisor and are able to appeal the involuntary status before an independent board of lawyers, doctors and lay people.

Treatment Goals: the goals of pharmacological treatment of first-episode schizophrenia are to minimize the duration of untreated psychosis and achieve full remission of positive symptoms using the lowest possible antipsychotic dosages. Pharmacotherapy should continued for 1 to 2 years past remission of symptoms and achievement of functional stability,  with longer duration considered if the person is unstable with residual psychosis. There are 10-20% of patients who do not relapse, but there  is no way to predict who they are for sure. 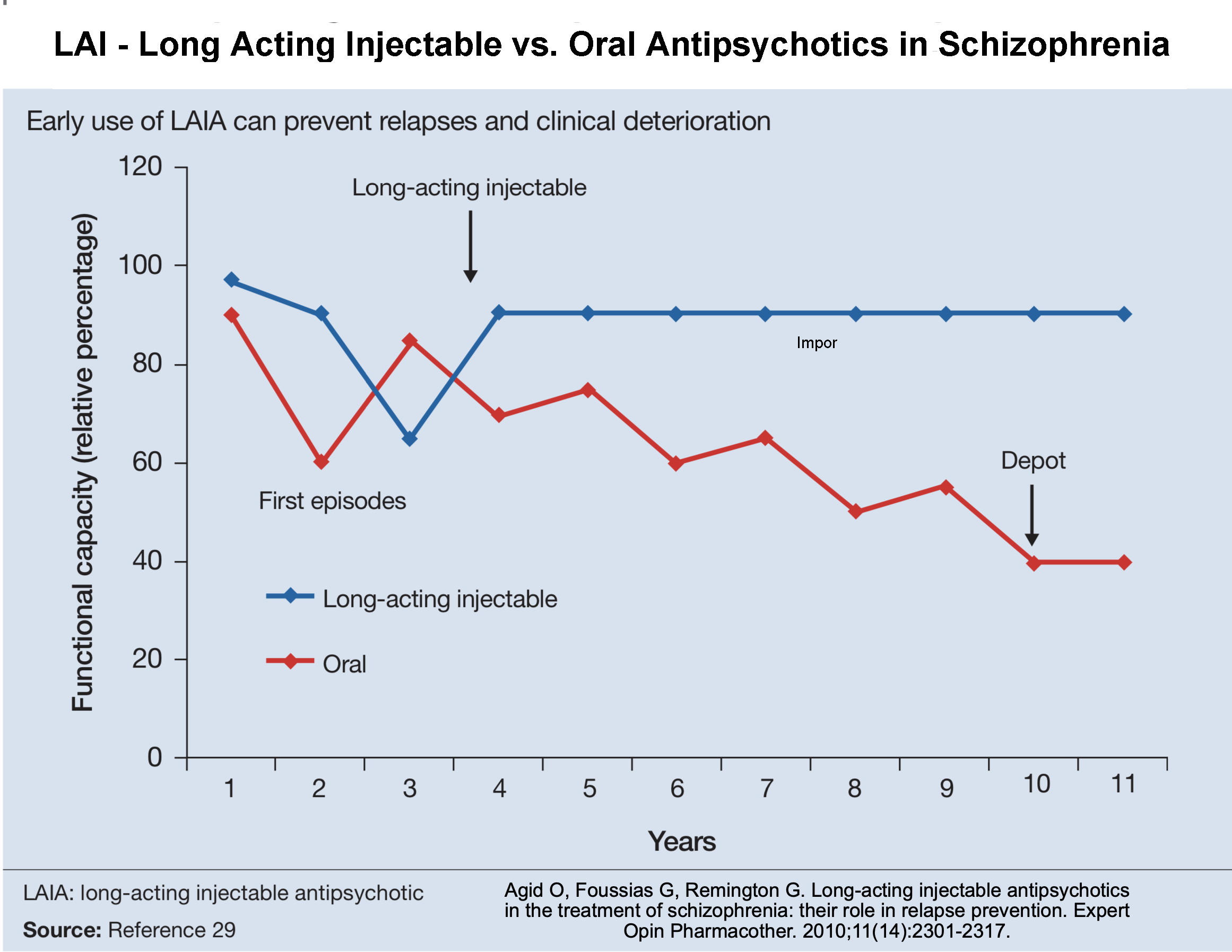 Neuro-protective Medications: In addition to effective treatment of Psychosis with atypical antipsychotics, other medications such as antidepressants, mood stabilizers, all have neuroprotective effects, including stimulating neurogenesis, preventing apoptosis, and increasing neurotrophins.

Other Resources for Schizophrenia:

3. SSO Schizophrenia and Substance Use for Consumers